NEW YORK, April 19 (Reuters) - New York police conducted an all-night rescue operation on Wednesday for scores of passengers stranded for hours on two commuter tramcars stalled high above the city.
The gondolas -- one suspended over Manhattan with 22 riders and another hovering over the East River with 47 people -- unexpectedly came to a stop at 5:22 p.m. (2122 GMT) on Tuesday, police said, due to a mechanical problem or electrical outage.
"Then a backup generator misfunctioned as well, which d the police department to begin rescue efforts," said police spokesman Martin Speechley. No injuries were reported.
By early on Wednesday, police had removed most of the passengers from the gondola above the East River, using a metal cage hoisted alongside the tramcar, according to news reports.
"It could take a number of more hours to get everyone else to safety because we're not rushing things," Speechley said. "In the meantime, there have been no injuries, passengers are in good spirits, and we're supplying them with food and drinks."
The tram makes regular 4-1/2 minute commuter runs between Manhattan and nearby Roosevelt Island and is noted for its spectacular views 250 feet (75 metres) above the East River. 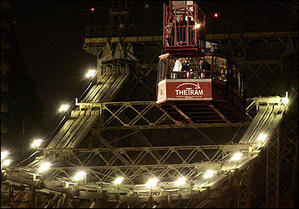